If you've heard anything about Oman, chances are it was about Muscat, with amazing reasons.

As well as some of the best diving in the world, it has a souk that rivals Istanbul's Grand Bazaar, just without all the jostling. But it's not even half.

Oman is opening up to tourism and some of its greatest treasures are just a day or so from the capital. Here's a selection of highlights while touring one of the world's most intriguing destinations: 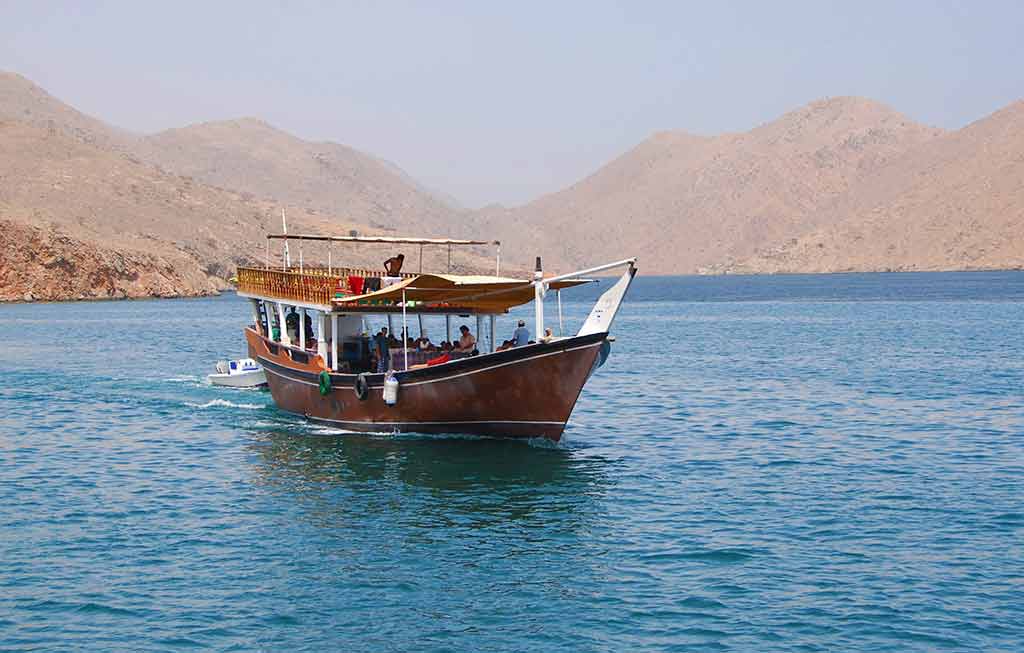 Musandam is a small triangle bordered by the United Arab Emirates and the Strait of Hormuz, not really the kind of place where you would expect something named after a geographical feature usually associated with Norway. But these unique bays with mountains rising straight from sea level to 2,000 meters prove that Oman is more diverse than many think. There is of course no ice. Winter temperatures average around 23 C (73 F).

Instead, there are golden and red rock walls dotted with palm-filled oases, separated by clear, warm water.

There are fishing villages, the traditional townships of Khasab and Dibba, and forts and wadis to explore on land, but the best way to explore the region is on an old wooden dhow, taken for a day or even hired for the night. 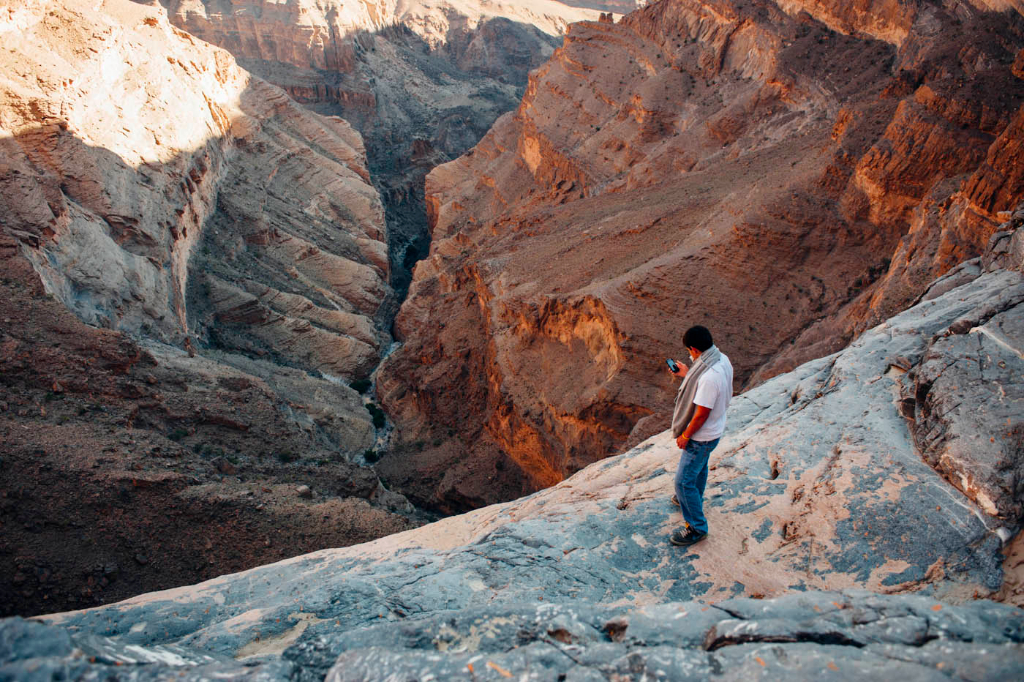 The Al Hajar Mountains (which extend several hours behind Muscat towards Dubai) resemble the surface of Mars.

Steep and barren, they rise dramatically from gravelly desert terrain to more than 3,000 meters at Jebel Shams, also known as the Mountain of the Sun.

It's possible to drive to the top, past 500-year-old Stone Mountain villages, children selling goat hair trinkets, and vistas that would look like Saudi Arabia were it not for the desert mist.

From the top, you can see Wadi Ghul. This eight-kilometer cut drops almost vertically by 1,000 meters in places. There are dates, old villages, and wadis to explore, a spectacular walk along the edge, and traditional guest houses to gain an insight into Omani life. 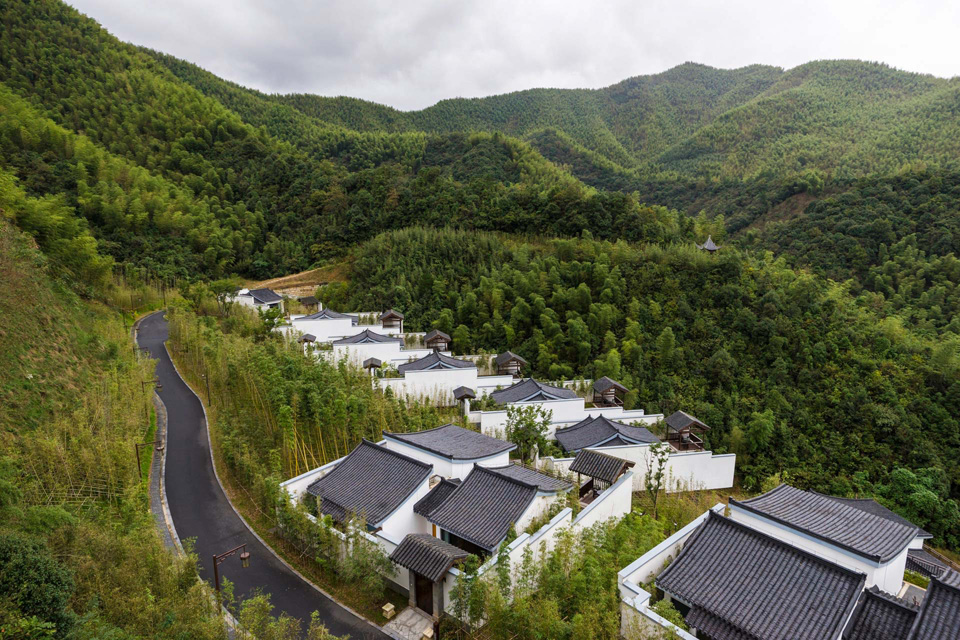 Jebel Akhdar ("The Green Mountain") is almost as tall as Jebel Shams, but with one big difference: it is green. After winding serpentine roads through the barren rocky landscape to the Saiq Plateau, there are a series of green terraces filled with pomegranate, fig, rose, almond and barley grasses.

A falaj (drainage older than buildings) system winds its way through five villages, bringing scarce water to the stony fields.

You can follow it on an easy day hike with stepped slopes, hungry mountain goats, brightly colored gates, and crescents atop simple mosques. 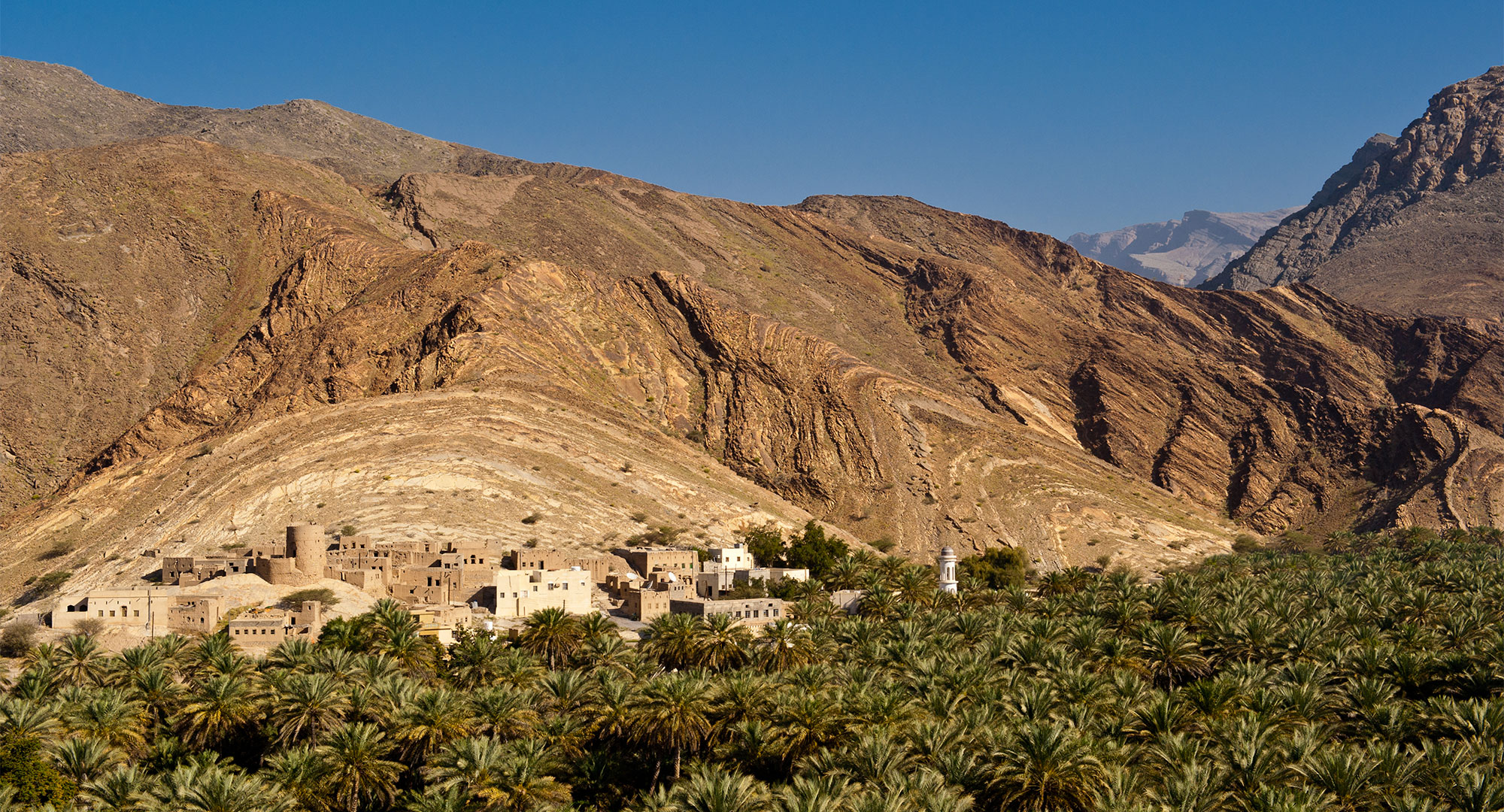 The Al Hajar Mountains are full of abandoned villages, but Birkat al Mawz is arguably the largest and certainly the easiest to explore.

Part of the village is still functioning, so anyone making their way into the abandoned brick mansions that lie in the shadow of Jebel Akhdar is advised not to disturb the residents.

There is a constant reminder of the architecture's fragile nature, despite the fact that it has existed in desolation for over a hundred years.

The roofs of the Bastikiya on the painted beams crumble, the muddy plaster turns to dust, and the desert wind whistles through the cracks and windows. Bayt ar Ridaydah (a reconstructed fortress) and the gigantic Falaj Al Khatmeen irrigation system, a UNESCO heritage site and one of the largest surviving in Oman, are worth a look.

Where to stay: The Golden Tulip, Hai a Thurat, Nizwa; 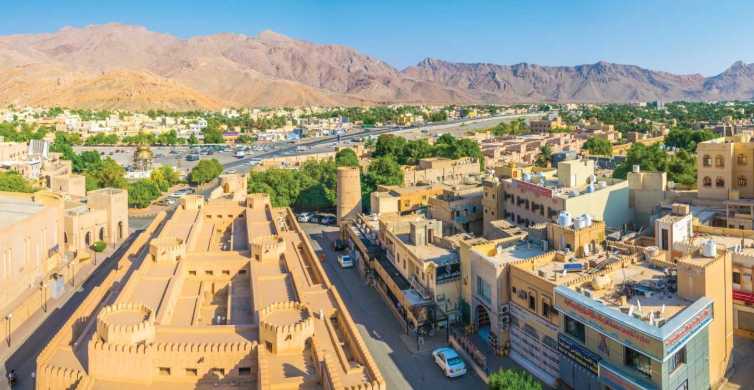 The Municipality of Bahla is also a World Heritage Site, thanks to its extraordinary fortress, which is steeped in glory and decay in cycles, which some say dates back to 500 BC.

The last restoration dates from 2010 and is now certainly in good condition.

An old wall surrounds the village, which is still quite a traditional rural oasis. During the tour, you can visit the local mud dwellings (harats), the Jameh Mosque, and the open-air souk.

A short drive from Bahla is Jabreen Castle, a 17th-century mansion. Unlike Bahla, this castle was built in times of peace and where the former is stark and unadorned, Jabreen is graceful and welcoming.

The many levels offer views of date orchards and the desert.

Where to stay: The View, Ruwi; 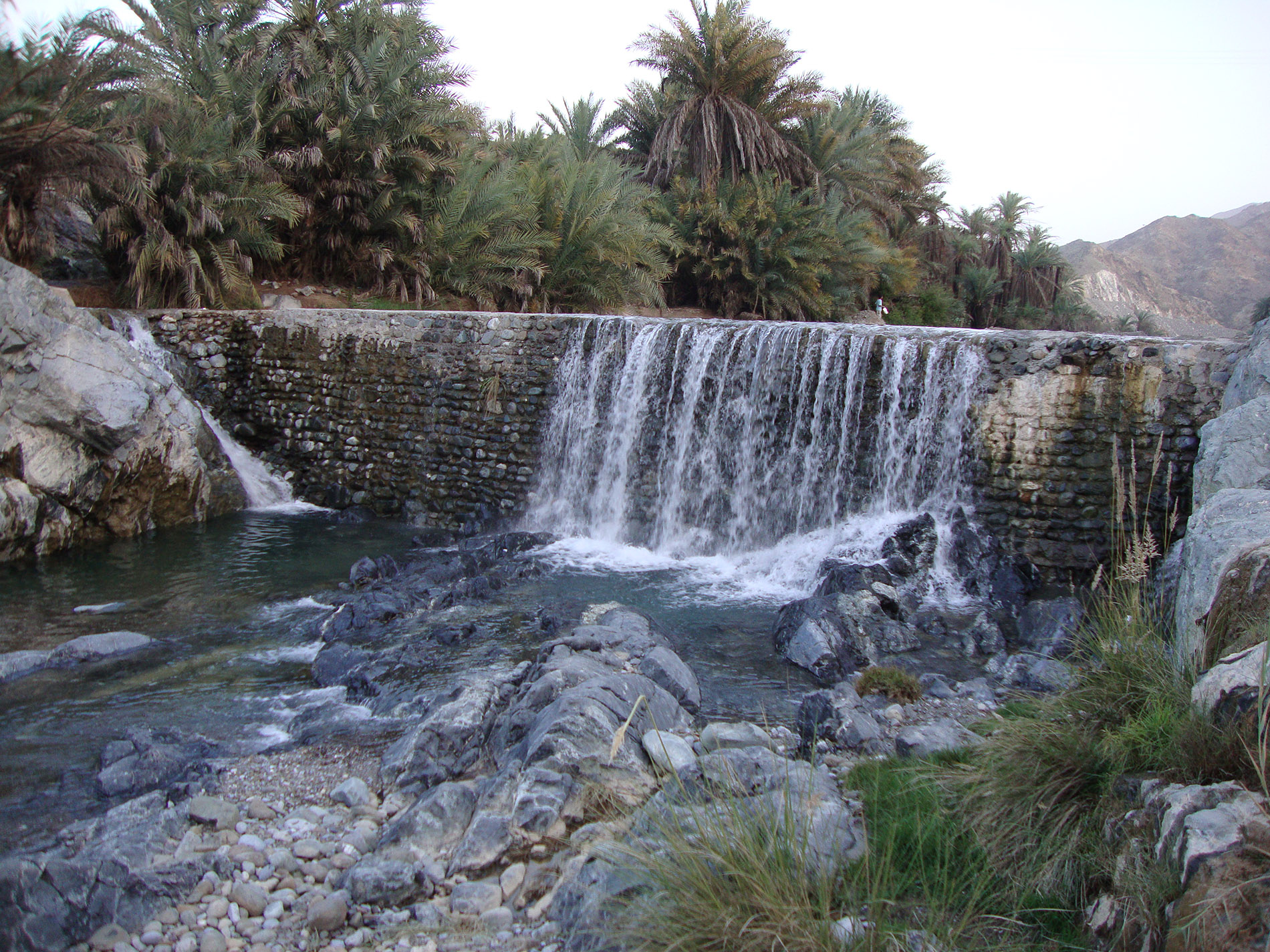 Stretching along the Gulf of Oman in northwest Muscat, the highway skirts the beach and banana plantations in the shadow of Sun Mountain and Jebel Akhdar.

The horseshoe road from Al Masnaah to Al Khaburah is the path that leads most into the Hajar Mountains, but this side is all about the wadis, not the peaks.

A wadi is a valley that fills with precious water seasonally, and the area around Rustaq has some of the most dramatic in the country, including plenty that flows year-round.

Wadi al Hoqain (also spelled Hawqayn) is the largest, but there are plenty to traverse, with swimming pools, waterfalls, and hikes through plantations, sleepy villages, and sinkholes, even hot springs.

However, caution is advised. This steep and rugged landscape is constantly sculpted by mighty rushing waters and it is easy to be swept away by both road and stream in rainy weather. 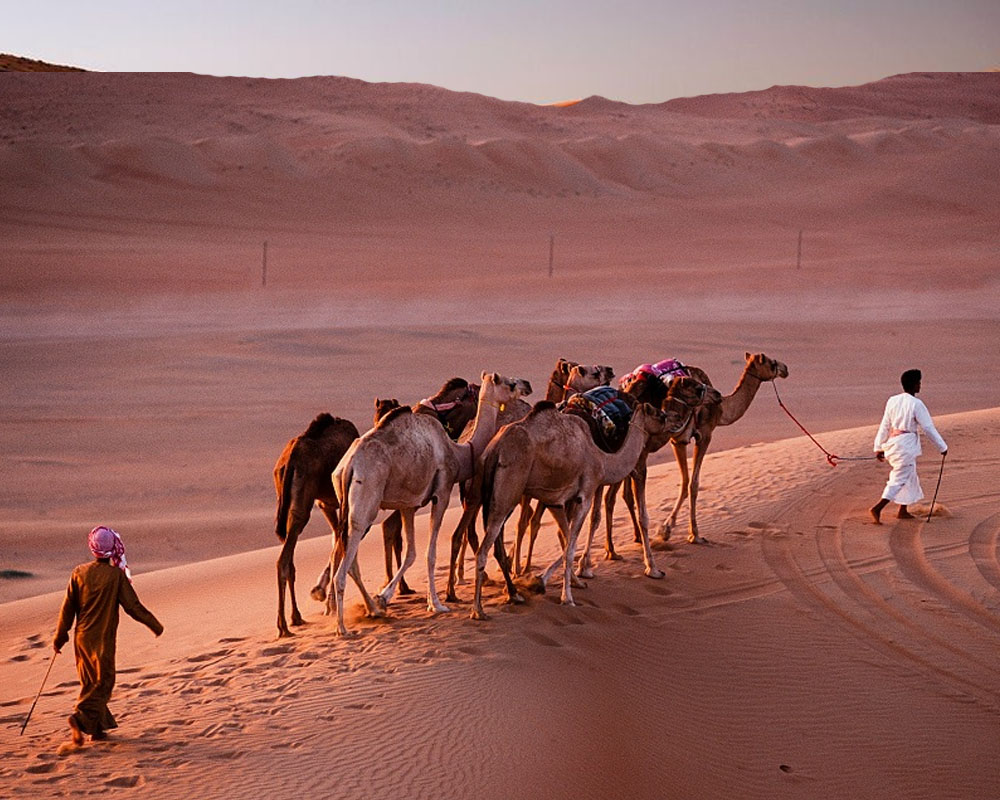 For some perspective on this place, it's worth checking Google Earth - it's the huge yellow-striped stretch just below Ibra. Most of Oman is desert, but the golden corduroy bowl of the Wahiba Sands looks like a real wasteland movie set.

With dunes of around 100 meters, multicolored sand, Bedouins, and camels, it certainly rivals the empty quarter of Arabia, Wadi Rum, or the deep Sahara.

Accessible only by 4WD, guided visitors can arrive and stay overnight at one of the few desert camps suitable for budget or luxury travelers with activities such as sandboarding and Bedouin-led trekking.

The more adventurous may want to drive and camp on their own – expect lots of near-vertical pitching in the soft sand and quad bikes roaring through the area. 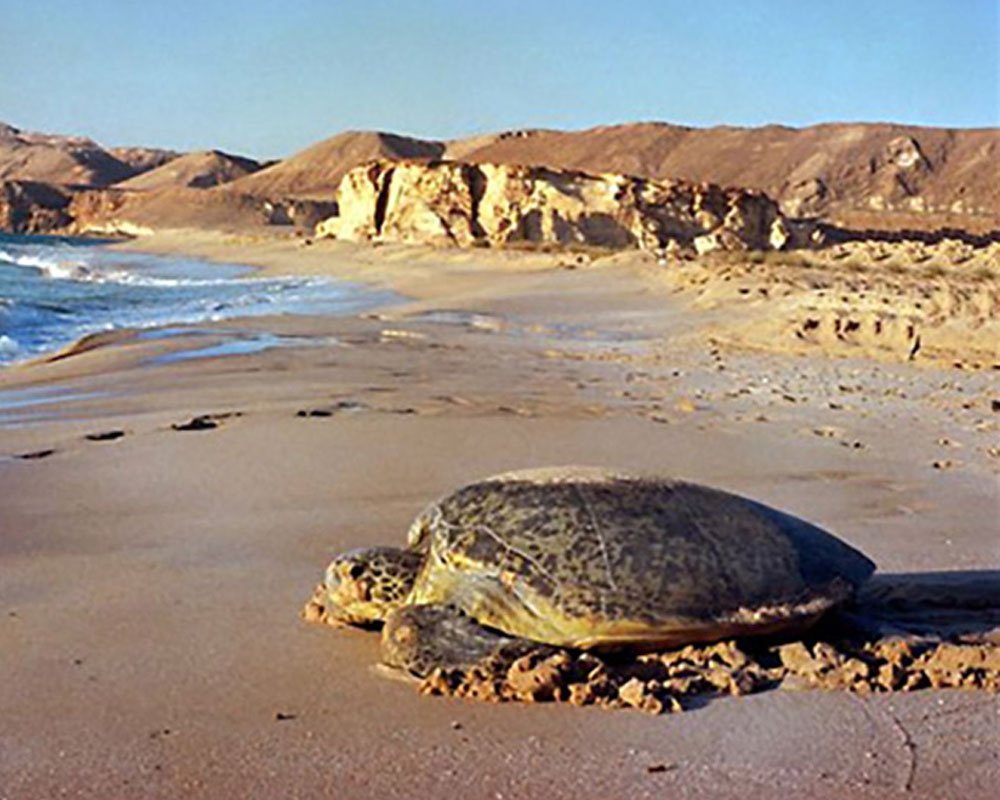 A short drive from the Wahiba Sands and a hop above Wadi Bani Khalid (another of Oman's great swimming pools), is the port city of Sur.

There are some castles, many beautiful boats, and some beautiful beaches, but most people come for the turtles.

The Ras al Hadd turtle sanctuary is nearby. It is open to the public and quite well-guarded. Cars must enter and park at 8.30 pm. A gentle walk down to the beach and sitting for several hours gives visitors a view of mother turtles laying their eggs. 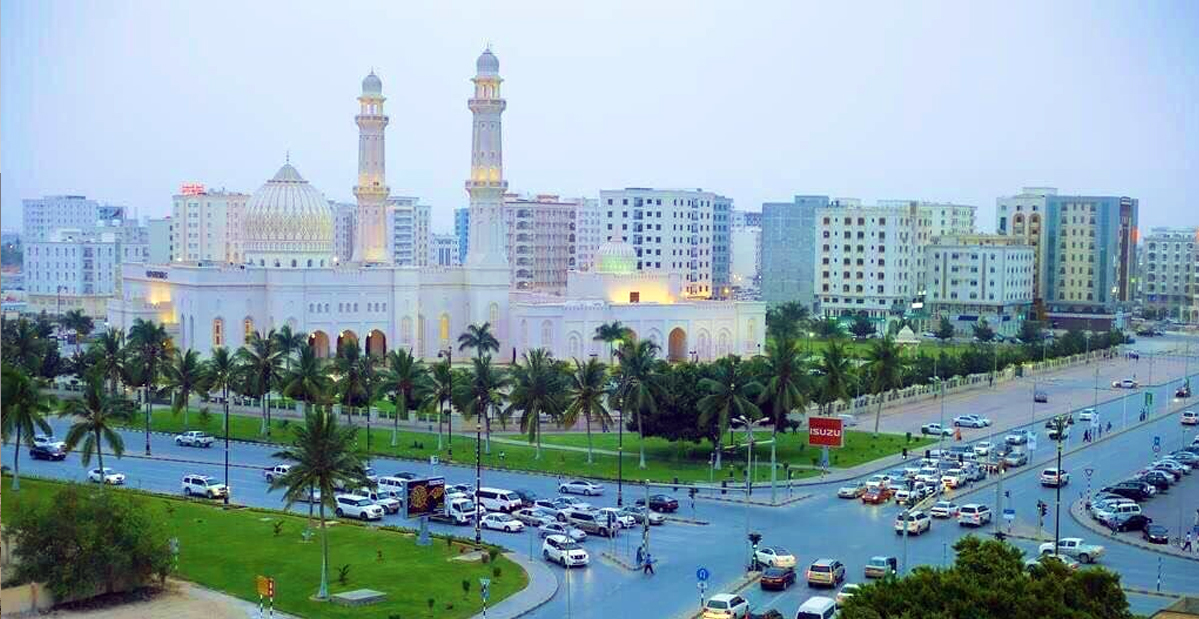 Salalah is the only place in the region worth visiting in the summer. In most of Oman, summer daytime temperatures average high into the 40s Celsius, day after day after day.

In Salalah, the southeast monsoon keeps the temperature lower by more than 10 degrees and it rains, day after day.

Known locally as Khareef, the season is celebrated with a six-week festival, and people used to the harshness of a desert climate dance in the rain.

The brown mountains are shrouded in greenery, the wadis fill to the brim and it is possible to understand how the Middle East once had a fertile crescent.

Outside of the Khareef, however, there's still reason to visit. Salalah is the perfume capital of the Middle East, with a UNESCO World Heritage Frankincense Plantation.

It also has outstanding biblical sites to explore, such as the Queen of Sheba's summer residence and Job's tomb. The area has five-star resorts dressed up as exotic Arab villages, fine sandy beaches, and clear turquoise waters.