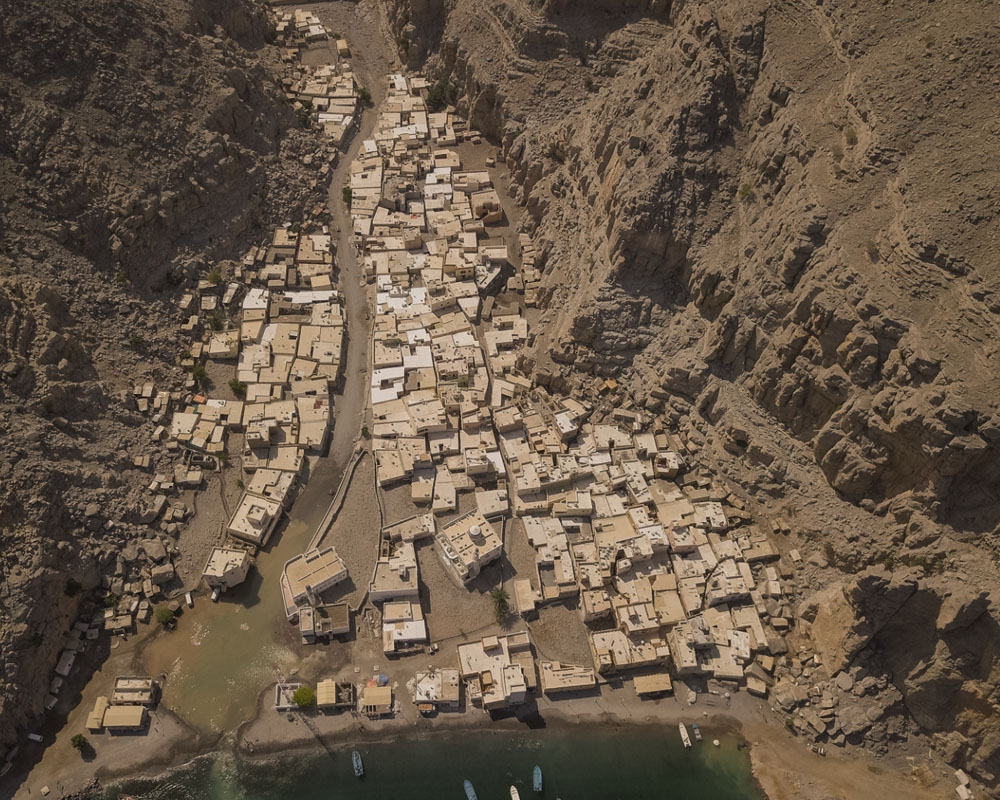 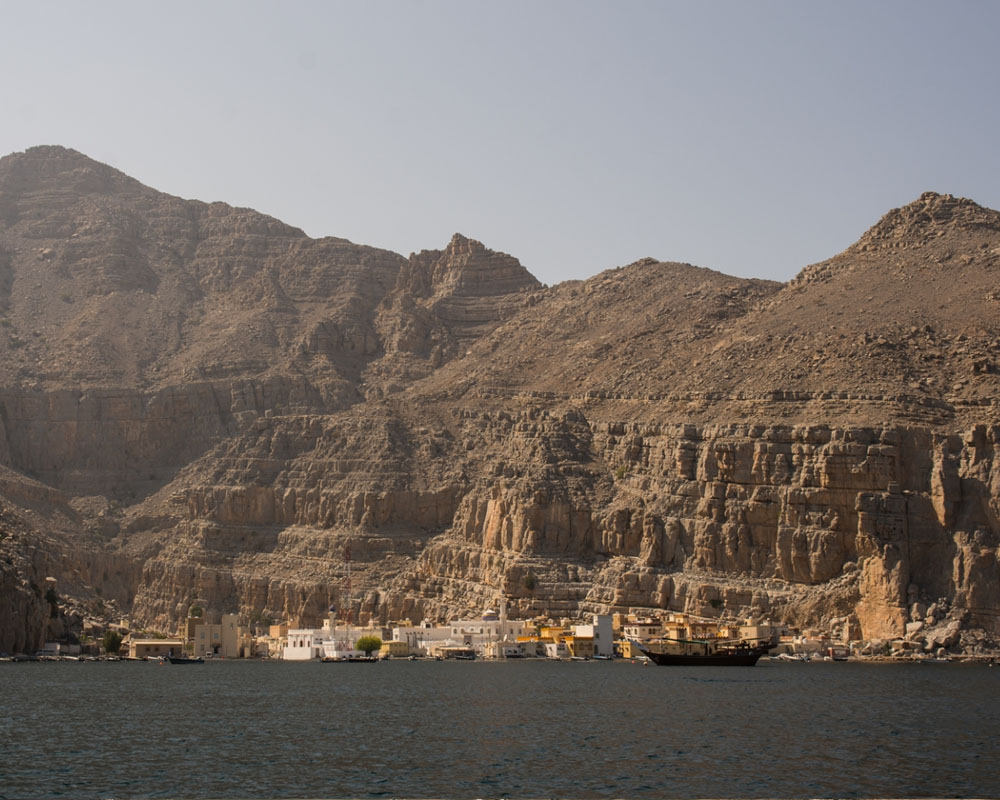 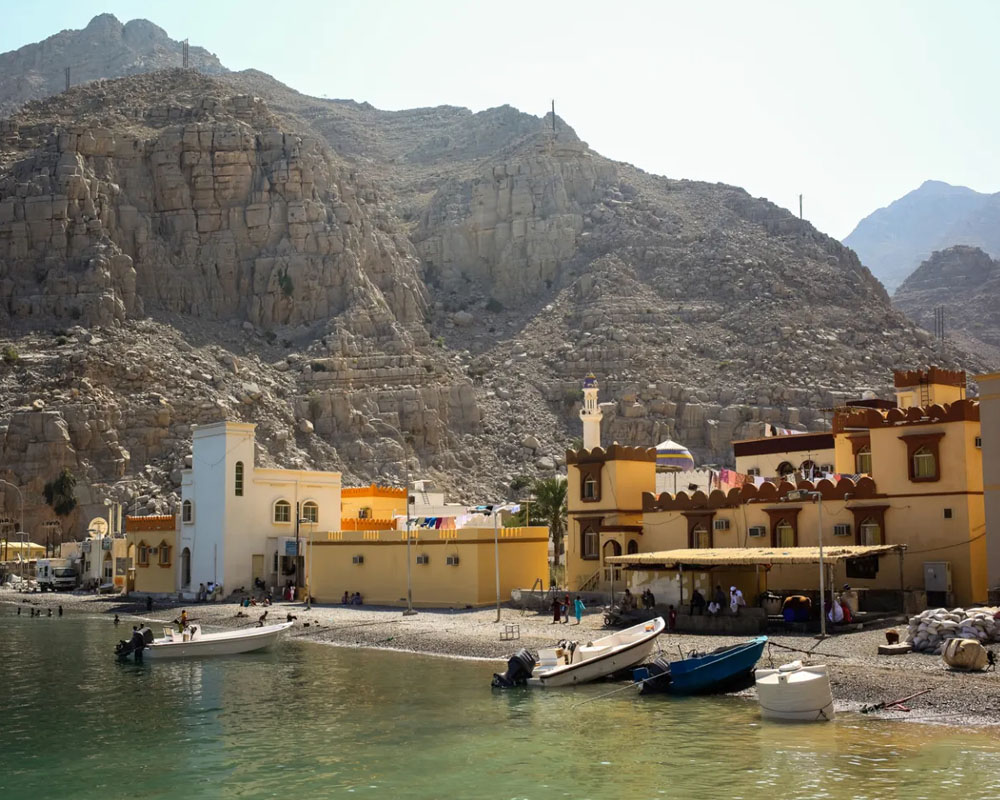 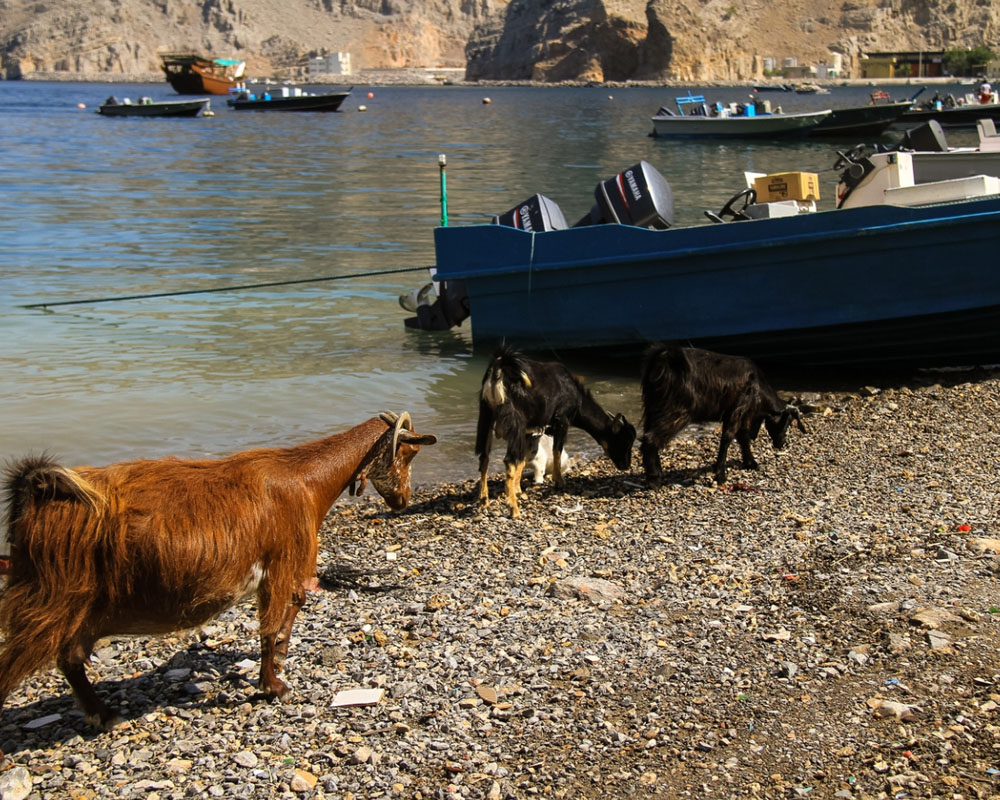 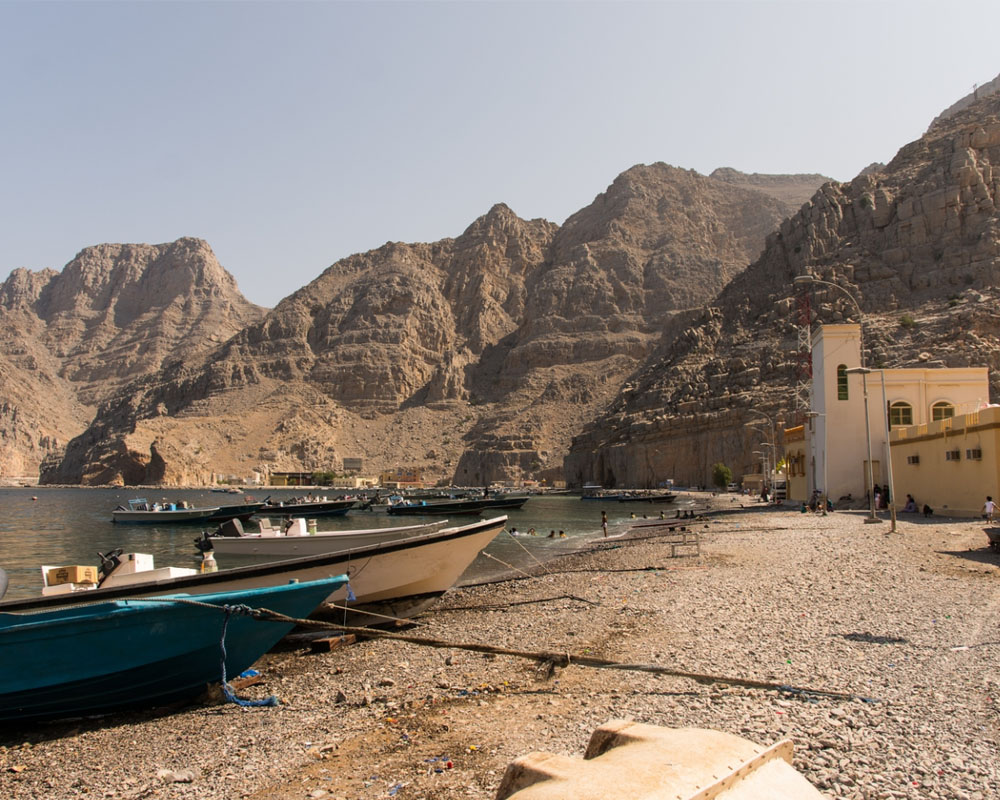 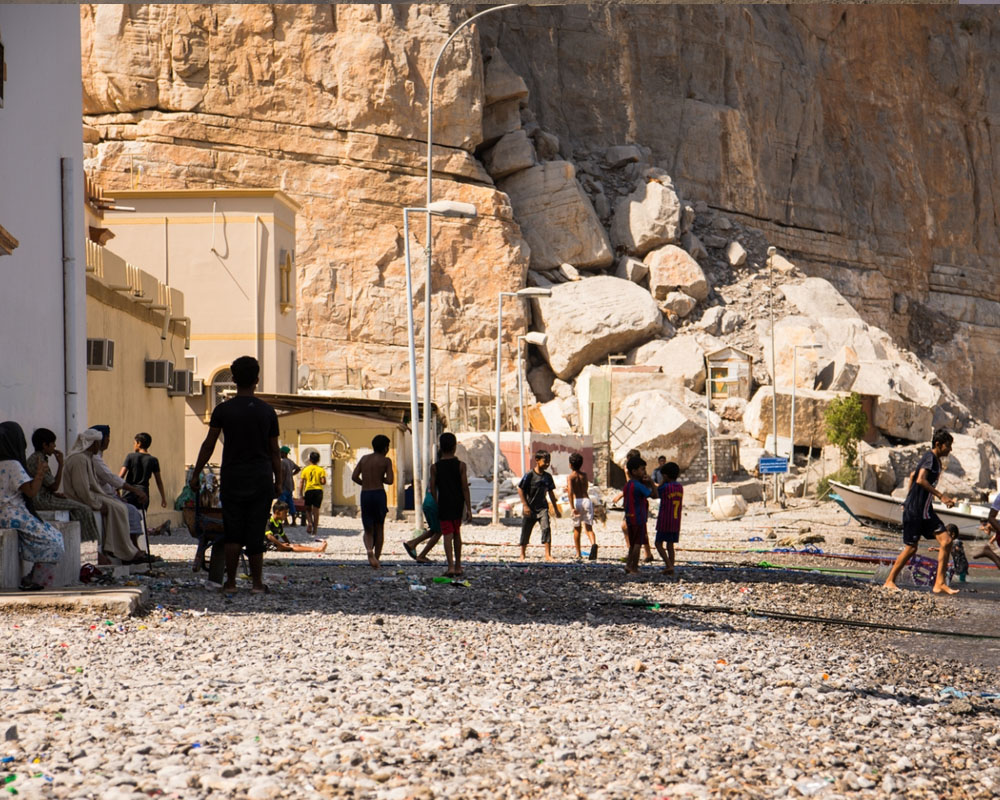 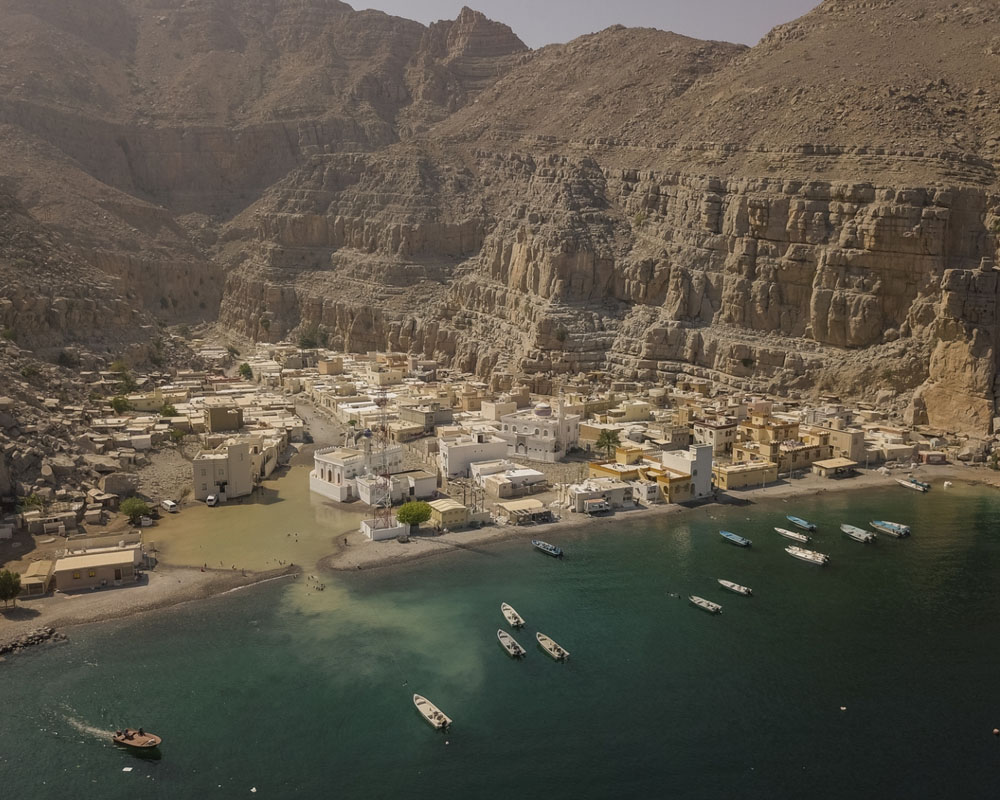 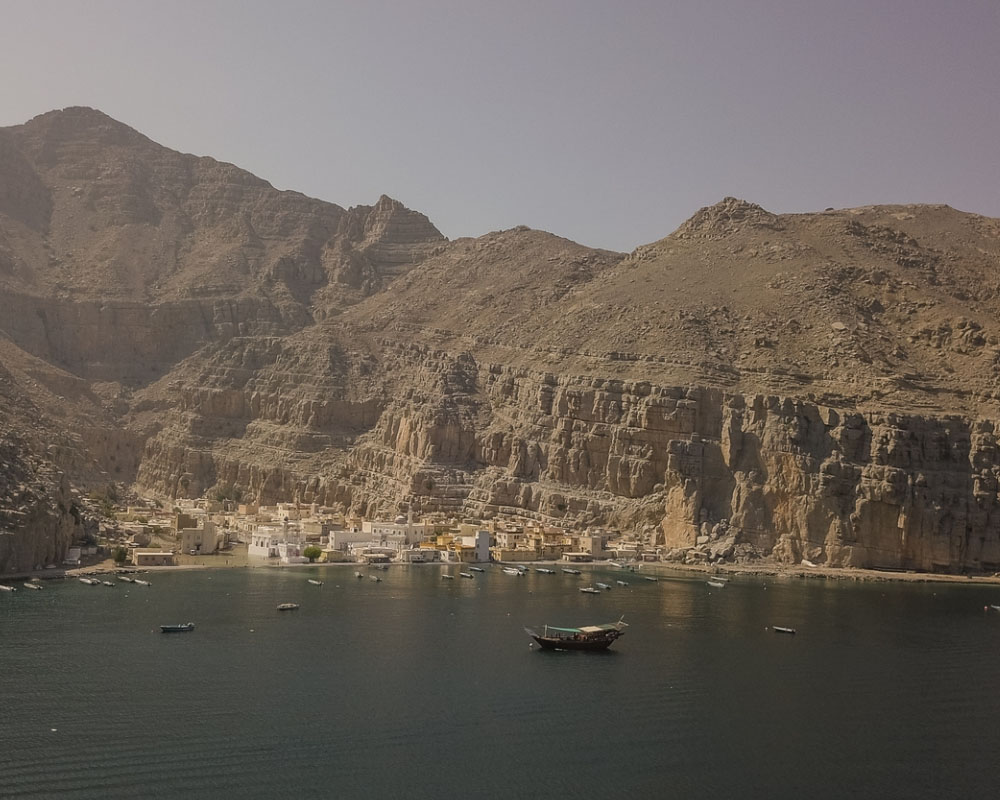 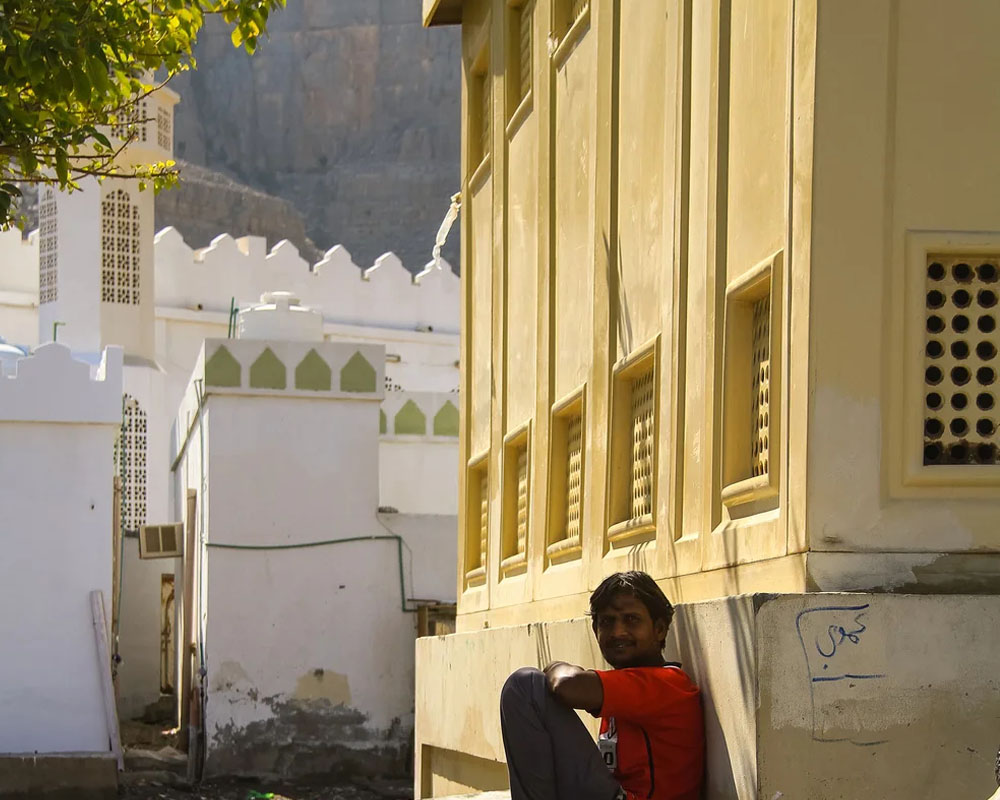 Kumzār, also written Kumzar, is a village in Musandam, the northernmost province of Oman. It is the second northernmost inhabited part of the country and the northernmost inhabited part of the continent, located on the Strait of Hormuz. The village is isolated and accessible only by boat. Kumzar has been inhabited for about 500 years, although exact data is difficult. Early Portuguese maps of the region mark a settlement in the area. The village's isolated location is home to a distinct language, Kumzari, the only Persian language native to the Arabian Peninsula. The religious practice of Kumzaris is based on Islam, but with traditional values ​​of popular culture. The culture is distinct from other Arab settlements in the region. Fishing is the main source of income, with tuna and sardines being the main catches. Most families have two houses, one in Kumzar and the second in Khasab. The extreme heat in summer makes Kumzar almost uninhabitable and from May to September most people leave Kumzar to stay in Khasab. In Khasab, the Kumzari are typically isolationist, with their own neighborhood; which is close to the sea and where all the houses are grouped together. Guests receive safety vests and a snorkeling kit as part of the tour and you will indeed get a delicious seafood lunch and drinks on the dhow.

The remote village of Kumzar in northern Oman

Kumzar (كُمْزَار in Arabic) is a remote village in the province of Musandam, governorate of the Sultanate of Oman.

It is located in one of the world's most strategic trade arteries, the Strait of Hormuz in the Persian Gulf between Oman and Iran, through which most of the world's oil exports pass; however, it is very isolated and only accessible by boat.

The village is the second most populous city in the north of the country and the northernmost of the inland population centers. Kumzar has been inhabited for about 500 years, although it is unclear exactly when. Already the first maps drawn by the Portuguese marked an establishment in the area where the city is currently located.

For centuries, the Kumzaris has been at the forefront of history. They witnessed and even aided the invading armies of the world's great empires who sought to control the strait, which is crucial for global maritime trade.

The easiest way to get to Kumzar has always been by boat from the mainland. Today, it is possible to reach the remote village by speedboat or typical dhow from Khasab. Khasab is a small enclave town in Oman bordering the United Arab Emirates. It is the local capital of Musandam Governorate and is often referred to as the "Norway of Arabia" due to its vast, steep, fjord-like coves and desolate mountain cape. This city is considered a tourist destination for locals and offers a port and an airport.

The geographical area of ​​Musandam, where Kumzar is located, is characterized by huge rock formations, inside forms a protected area of ​​fjords and coves, and outside a very rugged coastline, very exposed to the wind and offshore, where there is practically no vegetation; but the sea teems with life. Flocks of seabirds feed on fish among schools of jumping tuna.

Despite being on the coast, overlooking the open sea, Kumzar finds space between the creeks of a gorge, nestled in a fairly sheltered bay. The village of Kumzar has about 3000 inhabitants, mostly families, and most of them consist of several children; as we were told about 5-6 children per family on average.

Depopulation of rural communities is common throughout Oman, but local reports indicate that high birth rates in Kumzar have caused the village population to increase by around 300 people per year.

The locals live in complete harmony with their fellow citizens, the mountain goats, which can be seen roaming and climbing the rocks.

However, the majority of the population is semi-nomadic.

In autumn, winter, and spring, they fish and live in Kumar. In summer, due to the rise in temperatures over the gulf reaching 50 degrees Celsius, most of the population leaves Kumzar to settle in the nearby port town of Khasab where they harvest dates and own their second homes.

The liveliest place in town is the school. Girls and boys in white uniforms sit comfortably in an air-conditioned caravan and study different subjects.

But after school, you can see them swimming in the sea and playing together on the shore.

There is not much to do in Kumzar at night. There are only two restaurants, three shops, and two mosques.

Kumzari houses are built extremely close to each other. In fact, the only space between the overcrowded houses is a narrow drainage channel in front of the village.

The houses are made of stone and have small courtyards and flat stone roofs. The whole village is surrounded on all sides by high mountains, except one. This open side allows people access to the water and is where most daily activities take place. Inside the village, there is no place for such activities as it is completely compacted with housing.

The main diet of the Kumzari consists of goat's milk, cheese, goat meat, mutton, and fish. Figs, coffee, and canned foods are also eaten regularly. During the meal, mats are placed on the floor and the food is placed on them. Men and women sit in separate circles with other family members and share food from a tray on the mat.

The Kumzaris speak Kumzari (Arabic: لغة كمزارية‎, Luri: کومزاری‎), a southwestern Iranian language similar to the Larestani and Luri languages. Although fragile, it survives today with between 4,000 and 5,000 speakers.

It is the only non-Semitic language spoken exclusively in the Arabian Peninsula.

Kumzar's geographic isolation may have helped the local language survive in a country where the majority of the population speaks Arabic.

Kumzari is a mixture of Arabic, Persian, and Hindi, with some borrowings from English and Portuguese, adopted by European sailors who crossed the Strait of Hormuz for centuries, stopping in the village to take water and rest.

UNESCO has listed the language as "critically endangered", with linguists saying it could be extinct within the next 50 years.

Despite rumors of the possible extinction of the Kumzari language, locals attached great importance to the preservation of the language; although our conversations with them clearly show that the language is passed on to new generations who, as already mentioned, constitute a large part of the population growth of the village.

Besides, another rumor that the Kumzari language would not find its written form has been dispelled. As we were told, the language is written by humans, but there is most likely no documented official language structure, such as a documented vocabulary or grammatical construction.

Appearances can be deceiving, and although you might not think it at first glance, the Kumzari actually enjoy a high quality of life. The Kumzari are mainly fishermen. Fishing is the main source of income and tuna and sardines are the most caught fish. Men also build houses and carry out agricultural activities, collecting honey and shearing, slaughtering, and skinning animals.

Women process agricultural produce, feed, and milk animals, make butter and cheese, and do all household chores such as carrying water, cooking, and sewing. Others work as sailors, boat builders, traders, or craftsmen.

Some men also went to work in the oil fields of Oman or the United Arab Emirates. They are diverse in their careers and some work as doctors, nurses, businessmen, poets, writers, engineers, and teachers.

At first glance, Kumzar seems completely cut off from civilization, but a closer look reveals signs of modernization in the region, which has taken place over the past 10 years, with the help of the Omani government. In addition to electricity, he brought running water, a school and a hospital, satellite TV, and internet access to the village.

There is also a helipad where passengers wait for the helicopter. Twice a week, he shuttles between the inhabitants of the provincial capital.

The religious practice of the village is based on Islam, but with the traditional folklore of the region, which gives it a culture that distinguishes it from other Arab colonies in the region.

The Kumzari are fully Muslim and follows the teachings of the Koran. Like many Muslim peoples around the world, and like many other religions, they have their own type of popular Islam, which combines Islam with their pre-Islamic practices. They believe in evil spirits, which are repelled by cowries attached to the prows of their boats. They believe in a devil who casts shadows and walks around in rags with a basket in his hand.

They also believe in monstrous creatures of all kinds.